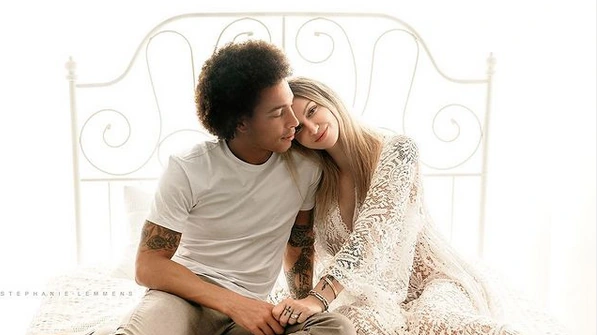 Axel Witsel is one of the most famous Belgian players, who impressed everyone when he was part of Zenit Saint Petersburg.

In 2018, Witsel decided that it is time for a new adventure in his professional career and after he spent five years with Zenit, the Belgian moved to Borussia Dortmund.

Witsel's football career is full of great accomplishments, as he helped the Belgian national team reach the third place in the 2018 tournament, but his personal one is also as interesting as his professional one.

Who is Axel Witsel's wife?

Axel and Rafaella started dating when they were still in their twenties and they have been together ever since then.

Axel Witsel and Rafaella Szabo's love story began in 2008, when she was still in college.

In 2015, after many years of dating and despite the rumours that they have split as Witsel had an affair with Analicia Chaves, the couple got married in a lavish wedding ceremony.

Analicia Chaves, who is the former lover of Karim Benzema, and Witsel had an affair in 2013.

Who is Rafaella Szabo Witsel?

Rafaella Szabo gained most of her popularity due to her relationship with the famous Borussia Dortmund and the Belgian international, Axel Witsel.

Despite being mostly known as the WAG of Witsel, Rafaella is also a photographer.

Now let's dig in deeper into Rafaella Szabo Witsel's biography and learn more about her.

According to her birthday, Rafaella's zodiac sign is Aries, which means that she is bold and ambitious.

The people born under the sign of Aries are also very passionate, motivated, and confident leaders, who build community with their determination.

Rafaella Szabo was born in Brasov, Romania, meaning that her nationality is Romanian, but she has a Belgian citizenship, as she has lived there almost her whole life.

Rafaella is not only extremely beautiful, but she also got the brains.

She studied at , but she also went to college Saint Martin Seraing.

But she chose a completely different profession than what she studied for, as Rafaella developed a strong love for photography.

Now Rafaella's job is as a photographer and she has her own company called RawHighlights, which specialises in baby photography.

It is reported that Rafaella Szabo Witsel's net worth is around $1- $5 Million, which is not bad for a woman at her age.

Axel Witsel's net worth is at a completely different level, as it is reported to be around €30 Million.

Rafaella is among the WAGs that have a great influence on their fan base.

We can easily say that Rafaella Szabo is a true Instagram star with the whooping 67K followers.

She loves to post teasing snaps to keep her audience engaged with her life, but she also loves to post lovely pictures of her children.

Rafaella is also very active on Facebook, which you can check here.

Rafaella and Axel have two children together and their third is on the way.

Interesting fact about Rafaella is that she shares the same birthday with her second daughter, Evy Witsel, who was born on March 31, 2017.